Last week the Penn Libraries hosted a Rare Books School course on the 15th century European book in print and manuscript taught by Will Noel and Paul Needham. As someone interested in the history of libraries and the movement of books over time, I've long been impressed by the volume of detailed information available in digital form about early European printed books. Online catalogs like the Incunabula Short Title Catalog (ISTC) and the Gesamtkatalog der Wiegendrucke (GW) contain tens of thousands of entries about these books including the whereabouts of known copies today. In browsing both catalogs I had been surprised by the wide distribution of incunabula in libraries throughout the world and inspired by the work of the Atlas of Early Printing, I figured it would be interesting to see the global scope of these collections in visual rather than textual form.

Both the ISTC and GW allow users to browse by lists of libraries which hold incunabula but where the ISTC displays library abbreviations/codes (see e.g. this list), the GW actually lists geographic locations with libraries grouped by city. In addition, the GW provides helpfully detailed alternate spellings and names for locations which make them easier to geocode, for example:   "Alba Julia [Gyulafehérvár, Karlsburg, Weißenburg]/Rumänien." For that reason I decided to use data from the GW here, which in all contains listings for some 2,330 place names with institutions holding incunabula.

I scraped the raw data from the GW web interface and then parsed it on my own which resulted in a few problems, namely while I captured all the place names accurately, some holdings libraries seem to have been lost in the shuffle. I've worked to manually correct these but would not be surprised if further corrections are needed. Likewise, the GW helpfully lists some libraries which formerly owned incunabula and which are now defunct or subsumed into other libraries.For example, for Philadelphia, I know that the number of holdings libraries listed (19) includes the former Mercantile Library of Philadelphia with 5 incunabula. All of these books are now in the Free Library of Philadelphia which means that the total for Philadelphia in my visualization includes one extra holdings location and 5 extra incunabula. In addition, and most importantly, my results from the GW are most useful in counting editions rather than actual physical books. That is, while there may be just over 5,000 separate 15th c. editions in Stuttgart, the Landesbibliothek there holds closer to 7,000 actual 15th c. books as a result of having multiple copies of the same edition (many thanks to Paul Needham for pointing this out). As a result, the exact numbers contained in the visualization should be taken with a grain of salt.


So, despite these caveats, what does the data look like? The top 15 list is hardly surprising, Munich tops the list thanks to the Bayerische Staatsbibliothek and its massive collection, but thinking geographically rather than nationally, Rome would come out as the clear winner if Vatican City and its libraries were included. Likewise, if judging by number of libraries/institutions reporting incunabula holdings (admittedly a somewhat hazy category), London emerges as the extreme outlier. I found the numbers further down the list more surprising, I would not have guessed that Dallas (1013) holds roughly the same number of early printed editions as Zurich (1002) or that Copenhagen (4146) would have a more diverse collection than Venice (3464), one of the centers of early printing.


Learn About Tableau
That being said, if anything the map hews more closely to the geographic origins of the books themselves than I fully realized (excepting the large holdings in the US of course!). The densest clusters of holdings institutions and indeed of incunabula themselves are in the homelands of early printing, German-speaking central Europe and Italy. Compare for example the two maps below, one from the current holdings data and the other from the excellent Atlas of Early Printing showing where incunabula were actually printed. The two pair up pretty well!

I expected that thanks to monastic dissolution and library centralization throughout the 19th century would have resulted in a fairly spread-out pattern of incunabula holdings with capital cities and regional centers being the big players with a few scattered libraries in between. This seems certainly to be the case in France and Spain where provincial cities and towns are less well-represented, but in central Europe, the big state and university libraries may have a large share of books, but there are still hundreds of small religious colleges, town libraries, and monasteries holding incunabula in the hinterlands. (If anyone is interested, the weighted geographic center of all current institutions holding incunabula is near the Atlantic coast of France outside of Nantes).

These maps also drew my eye to blank spaces which in turn highlighted borderlands between book-dense areas and those with relative scarcity today. The Adriatic seems to be one such area, with its string of Catholic and state libraries extending down the Croatian coast including Dubrovnik, Zadar, and Šibenik serves to highlight the lack of 15th-century printed books in the interior of the former Yugoslavia - perhaps reflecting the ravages of war, different book/manuscript cultures in Orthodox and Muslim regions, or just the simple lack of good library data. 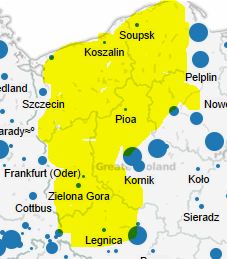 Something similar struck me about the region to the east of Berlin and the west of Poznan, a seemingly "empty" salient stretching south from the Baltic sea (left). I know next to nothing about this area but would have thought expected a more even distribution of libraries.


Of course, scale is everything. While the views above are intended to highlight cities which possess truly significant incunabula collections, the map below is perhaps a fairer representation of the data - with the sizes of the dots scaled by quartiles. In this view, the truly broad range of holdings locations comes into play, as on this map the top quartile (largest dot) is reserved for any place holding 65 incunabula or more - a seemingly low bar which reflects just how many locations own a very small number of early European printed books.

Finally, this world-view impressed on me the lack of reported holdings in North Africa and the Middle East generally. The fact that there are only four incunabula from Istanbul reported in the GW is somewhat shocking (for more see Les incunables de la bibliotheque des Musees Archeologiques d'Istanbul). Considering the place of the Ottoman Empire in Mediterranean and world history, the lack of greater numbers of early printed books in Turkish libraries begs an explanation (library destruction? lack of cataloging?). Likewise, the lack of reported holdings in Egypt prompted me to start searching library catalogs. I found six unreported in the new Bibliotheca Alexandrina but am sure there must be more in other Egyptian libraries as well.

I look forward to discovering more in the data over the coming weeks and I can't stress enough how important rich bibliographic databases like the ISTC and GW are for scholars. They are exceptional resources that took decades of work to put together. Given the amount of work that went into creating their data I hope that in the future there will be a way for both to offer machine interfaces which make the downloading of raw data simple and these kinds of visualizations second nature to researchers.