Expanding the Republic of Letters: India and the Circulation of Ideas in the Late Eighteenth Century

Today I'm presenting at the Society for the History of Authorship, Reading & Publishing (SHARP) annual conference which is being held here at Penn. Rather than giving a traditional conference paper I will be participating in the "digital project showcase" which features a number of really fantastic digital book history projects. I thought it would be helpful to post here some of what I will be showing today at the conference.

My project was inspired in a way by one of the most successful visualization projects of the last few years, Stanford’s Mapping the Republic of Letters project (ROL). The project uses data about thousands of seventeenth and eighteenth century letters to provide a powerful visual representation of how intellectual and correspondence networks functioned over the long eighteenth century. The visualizations that result from the project are quite powerful and illustrative and have immediate impact on students and others trying to get a sense of the geography of the Enlightenment. Taking as an example the 1751-1800 period below, one finds in the ROL visualization what one might expect: Paris, London, Edinburgh, Geneva, all show up
brightly as nodes of discourse and communication: 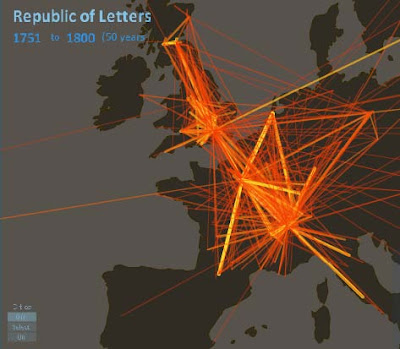 Without diminishing the ROL's achievements though, I was immediately struck by the absences encoded into this sweeping view of the Enlightenment. As a historian of 18th-century India, I was especially concerned about what it meant that it is visualized in the ROL as connected to the European Enlightenment in this period by just a single slender line: 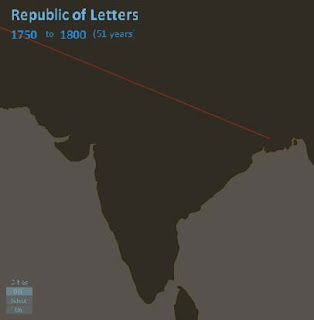 In my own research on legal culture in early modern India I had long been struck by the ways in which legal information and texts flowed in all different directions between and through India and Europe. For the SHARP showcase then I proposed a new visualization of the eighteenth-century, one which would focus on circuits of knowledge exchange in the form of textual movement between India and the rest of the world.

The resulting project is based on extensive research and data from wills, inventories, auction and library catalogs, as well as correspondence and other records. To be more precise, the visualizations below come from some 2,400 mentions of print and manuscript texts sent to India from abroad or which were produced or owned in parts of European-ruled India. Spelling out these sources I think makes clear the limits as well as the potential of the project. Records of book ownership and text circulation in 18th-century India are difficult to get at and since my goal was to show connections with the wider world, I necessarily focused on nodes of greatest contact, especially the East India Company port cities of Bombay, Madras, and Calcutta, as well as other European enclaves like Tranquebar and liminal zones like Lucknow. Much is obviously lost in this survey, especially the enormous body of Persianate literature that circulated throughout central and south Asia as well as those texts which moved between China, southeast Asia, and India. Yet for now, there is only so far I can go and I look forward to building on the project with the assistance of other scholars.

So what were the results:

Instead of that measly thin line connecting India with Europe in the 18th century we see a robust array of connections. The blue lines represent texts flowing from Europe/Americas to India and, perhaps more importantly, the red lines represent texts moving outward and within India. Though you can manipulate the visualization above as you chose I thought I would highlight some of the more significant questions that I think come out of this view.

First is the need to look beyond print to see networks of circulation. In his impressive bibliography of printing in South Asia, Graham Shaw lists just 1,344 imprints from mainland South Asia before 1800 (Another 427 come from Dutch Sri Lanka). Many of these books were printed in extremely small numbers and are not known to have circulated particularly far. As a result, the print connections between Indian-produced materials pale in comparison to the inflow from Europe. If we select only flows of manuscript material however we remove much of those large blue print-lines from Europe and see a richer picture of the circulation of Indian texts:

In addition to showing the movement of texts in aggregate I also wanted to be able to say something about the nature of these texts. Thinking of the Stanford ROL project I decided to see what the movement of texts by authors whose correspondence is represented in that project (~40 or so including Adam Smith, Voltaire, Rousseau, and Locke). Their texts were some of the most popular in my records though notably, because of the nature of the data, most in English translation:

This kind of geographic visualization also flattens different kinds of textual transmission. Should the fact that an English soldier in Calcutta owned a European-printed copy of Goethe's Sorrows of Young Werther be represented equally with the fact that a pirated translation was printed at Calcutta in 1792 (though no copy survives today)?

Though slightly disappointed with the informational value of the Enlightenment authors map, I was more curious about those texts which I labeled as being broadly scientific, algebra texts, accounts of experiments, journals of temperatures, Persian treatises on medicine, etc. : 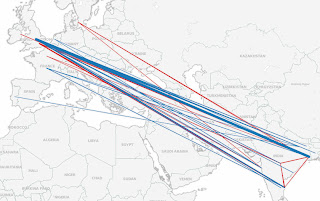 The map to the right shows the interplay and diversity of transmission of these "scientific" texts. Rather than a homogeneous block of European science entering India, there was a robust interested in locally produced scientific and medical accounts by authors of all kinds.

Yet, perhaps the most well distributed exchange of ideas seems to have taken place in the realm of historical texts and the accounts of political structures produces in both Europe and India. Though scholarship on early Orientalism has often focused on religious and philological translation and collecting, perhaps more than anything else, 18th century Indian readers and collectors relished histories. These included texts from Europe like Paul de Rapin's History of England or those from India like the Alamgir-Nama of Mirza Muhammed Kazim both of which circulated widely:


I'm just starting to take a look at these maps in an attempt to formulate further research questions and I do hope readers will play with the interactive features to ask questions of their own.

Geographic maps only go so far though in representing this circulation of texts. They tend to aggregate and obscure individual books and historical actors. For that reason I turned to another type of visualization in an attempt to understand which books and readers featured most prominently in my data. 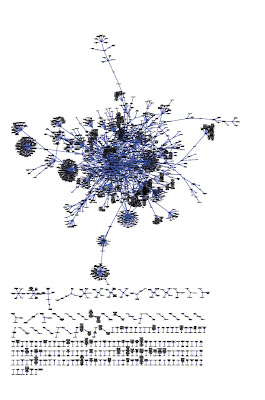 To the right is the bewildering array of connections formed when one plots texts with common owners, that is, who is connected by shared ownership of particular titles and what can that tell us about the circulation of texts in India. This view is of course barely useful in its current state other than to show a central cluster of connected people and texts and at the bottom an array of people and texts who remain unconnected. To see the full network in PDF form see here.

A different view of the same data I think proves more instructive:


This view shows the very center of that cluster above, this time however, the size of each node (dot) is determined by the number of connections it shares with its neighbors. In this case the black dots represent particular titles and the red dots particular owners. The large nodes here are the most popular texts, including the Bible, the Works of Jonathan Swift, Alexander Pope, and Shakespeare, Addison and Steele's Spectator, a variety of print and manuscript Persian dictionaries, Tristram Shandy, and the classic Persian prose work, Sa'di's Gulistan. Looking further afield from the classics though there are some interesting questions to be asked. I noticed in perusing the records that two Bengali men in Calcutta seemed to be purchasing a number of books at estate sales. One of these, "Gopee Tagoror [Tagore]" seems to have been especially interested in anti-onanism tracts. In fact in 1767 he bought a hot-of-the-press warning on the "Detestable Vice of Self-Pollution" [ESTC T207134] which is today only held in two libraries worldwide. Was he a bookseller? A fan of self-improvement literature? A committed anti-onanist?There is much to interpret here and I hope both at today's showcase and in future conversations to begin mining these connections for what they can and cannot tell us about the cultural world of colonial India in the late 18th century.

As a final coda, just hours away from the showcase itself, I'm completely humbled by how frustrating a task this proved to be. At the end of this stage of work I realize just how central absence and omission are to any visualization of historical information. No matter how much I tried to "fill in the gaps" my visualization remains constrained by data available and historical uncertainty and I've come away knowing that while I may have added a useful addenda to the vision of the Enlightenment that ROL offers, it is far from complete and perhaps offers its greatest value in forcing us to ask what is missing.

359 records from 1777-1800 (majority 1778-1782) taken from official lists of inventories sent to the East India Company in London. These were coded by Margot Finn and her team under the ESRC funded project: "Colonial possession : personal property and social identity in British India, 1780-1848" and are available as UK Data Archive: Study Number 5254.

255 records extracted from 28 major catalogs of Persian and other oriental manuscripts including those of the British Library, India Office Library, Oxford, Cambridge, Edinburgh, the Bibliotheque National, the Salar Jang Library, Harvard, Yale, Michigan, the Royal Asiatic Society, the Phillipps collection, The Danish Royal Library, the Khuda Bakhsh Library, and others. This work is ongoing.

141 records based on notes from assorted inventories, library lists, and mentions of books contained in official East India Company Correspondence, printed reports of the Supreme Court at Calcutta (1774-1800), and other secondary sources.
Posted by Mitch Fraas at 8:23 AM