Here at Penn, the rare books cataloging team has been working for the past several years to put images of bookplates, bookstamps, and other provenance markings online in order to facilitate identification of former owners and libraries.  Thanks to the project, I've become increasingly interested in how digital tools might help scholars reconstruct historical libraries and networks of texts.

I've long been interested in the mass movement of books that took place over the 19th and 20th centuries, whether as a result of the dissolution of monasteries, the increased economic and cultural resources of the United States, or the unprecedented tragedies of the World Wars. The wide-scale looting and destruction of books and cultural artifacts by the Third Reich in the 1930s and 40s has drawn an increasing amount of scholarly interest in the past few decades [1]. Even George Clooney is getting in on the action with his upcoming movie on the "Monuments Men" team that worked to locate and preserve works of art during the last months of the war. In reading more about the fate of books and libraries destroyed or stolen by the Nazi regime I was excited to see that the records kept by the central collecting point for looted books at Offenbach were available both in microfilm and (for a fee) online. These records were largely compiled and saved by Ardelia Hall (1899-1979) who was an adviser to the State Department with a tireless focus on returning looted WWII property.

By mid-1946, U.S. and other allied forced had assembled more than 2 million books from Nazi repositories at Offenbach with the aim of returning books to rightful owners wherever possible. The records of this endeavor are voluminous and are available in some 13 reels of microfilm from the National Archives as NARA M1942. This microfilm series has been digitized by Fold3 and is available to subscribers of that service.

To aid their work of cultural restitution, officers at the Offenbach depot made several albums of photographed bookstamps and marks found inside books in their care, which they organized by apparent place of origin. They also created additional albums featuring markings from private libraries and owners which bore no readily identifiable geographic point of origin. All told the albums contain thousands of ownership marks, a perfect candidate for mapping. Feeling decidedly unqualified to tackle the album of markings from Eastern Europe or the vast number of miscellaneous private stamps,  I started with those from Western Europe. The Western European album compiled at Offenbach includes pages categorized by country, i.e. America, Argentina, Austria, Belgium, Denmark, France, Germany, Great Britain, Italy, the Netherlands, Palestine, Spain, and Switzerland, with by far and away the greatest number coming from Germany (344/514). In all there are more than 500 ownership markings present in this geographically sorted album [2].


Each page of the album usually contained many reproductions of book markings crammed together with a reference number but no textual caption. Wanting to create a database of individual library marks, I began by isolating each bookstamp or mark from the album, beginning with those from Germany. I wanted to see geographically where these likely-destroyed libraries and private collections were located and to be able to sort out different types of institutions which had been targeted by the Nazis. The results of this mapping can be seen above and are searchable at http://viewshare.org/views/mfraas/offenbach-bookplates/ [does not work in IE].

In all I mapped 289 library markings to 127 locations with 55 markings remaining unknown to me (images of each individual library mark including the 55 unknown are also available on Flickr). The very top of the list is not surprising, Berlin and Frankfurt virtually tied (32 and 31) for the cities with the most library markings recorded in the Offenbach album, but I was a little surprised that the relatively small city of Hildesheim had as many markings recorded as Hamburg. 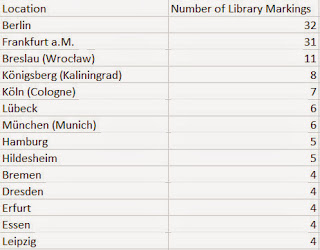 It should be kept in mind as well that these figures only represent those library markings in the "Germany" Offenbach album, countless private and otherwise unidentified-by-place markings exist in the other albums. I faced more difficulty in coming up with vocabulary with which to categorize the types of libraries present in this album. The overwhelming majority of book markings of course came from Jewish institutional or private libraries but in my cataloging of the book markings I have largely reserved the "Jewish" library label for institutional libraries such as those of synagogues and communal organizations and not private libraries of those who have names that might suggest Jewish ancestry. As a result, a significant number of library markings are coded as "other." Nonetheless as the map shows below, there is still value in looking at the library markings by type:

These caveats pale in comparison though to one of the central problems with making conclusions about wartime destruction of libraries based on the Offenbach albums. The Offenbach team photographed all the provenance marks on a book they could find, which do not necessarily represent the library from which they were looted. This can be readily seen in the "State Library" category on the map. The stamp of the Bibliothek des Bayerischen Landtags in Munich (right) is included in the "Germany" album but this obviously does not mean that the library was looted by the Third Reich, rather that the book had once been in the collections of that library at some unspecified prior point. Thus without further investigation it is difficult to know from this evidence exactly which library owned a given book on the day it was seized by the Third Reich.

Nonetheless, I think mapping out these places of origin is exceedingly important when done with a more nuanced set of questions in mind. Taking the markings as evidence more broadly of the location of Jewish and other libraries in the decades prior to World War II  provides both a kind of historical recovery and might eventually offer data that could be used by scholars to make new arguments about the diffusion of reading and book culture in central Europe as well as its subsequent destruction.

Obviously mapping just shy of 350 library markings is not going to accomplish this task and I'm excited to move forward to try and catalog all of the markings in the Offenbach albums. This can only be accomplished by a large number of participants with the knowledge and language skills to identify often hard-to-read reproductions [3]. Fortunately, the Center for Jewish History in New York has digitized copies of the albums owned by Col. Seymour Pomrenze, one of the American officers assigned to Offenbach. These albums are virtually identical to those in the National Archives and the CJH digitized images are of better quality than the NARA microfilm. Though I haven't cataloged or geo-located them yet I have used the CJH images to put online the remaining 174 library markings from the "Western Europe" album on Flickr. Melanie Meyers and others at the CJH are working on identifying a broad swath of Eastern European and other marks from the albums and I hope in time a more complete picture, usable for research and discovery, emerges.

This literature is large, a good introduction is the collection of essays The Holocaust and the Book: Destruction and Preservation (University of Massachusetts, 2001). Here at Penn, historian Kathy Peiss has been working for several years on the responses of the library profession to wartime looting and post-war book distribution/repatriation policies. See her "Cultural Policy in a Time of War: The American Response to Endangered Books in World War II," Library Trends 55.3 (2007), 370-386. For a specific example of work on the bookplates in the Offenbach collection see  Frederik J. Hoogewoud, "Dutch Jewish Ex Libris Found among Looted Books in the Offenbach Archival Depot (1946)” in Chaya Brasz & Yosef Kaplan, Dutch Jews as Perceived by Themselves and by Others. (Leiden, 2001), pp. 247-261 (a version is available online through the Clinton Presidential Library).

The "Western European" album (album II) can be found at the National Archives as NARA 260-LM-II-F and on microfilm as M1942 reel 12, frames 506-548. Another copy of this album is in the Colonel Seymour J. Pomrenze papers (P-933) at the Center for Jewish History  An additional copy of the bookplates can also be found at the University of Chicago (Codex Ms 1393). The NARA microfilm has also been digitized through Fold3 and is available online to members of that service at http://www.fold3.com/browsemore/hRyVVKV8Z_1/ .For the 344 "Germany" library markings mapped here I have used microfilm images from M1942 via Fold3, for the remaining 174 markings from album II on Flickr I have used digitized images from the Pomrenze papers at CJH.

Library markings from WWII-era books are already available online in a few forms outside of the Offenbach records. See for example the Brisman collection digitized at Washington University in St. Louis. The Koordinierungsstelle Magdeburg in Germany maintains a database at  Lostart.de which includes some descriptions and pictures of library markings in looted books.