Title pages can be deceiving. Bibliographers have long learned not to trust colophons and other declarations of place and date. The image above, for example, declares that a book was printed at Boston in 1792 while in fact it was printed in Heidelberg Germany.

I've always been fascinated by these so-called "false imprints," those books which claim information on their title pages or other paratext which purposely misrepresents the circumstances of a book's printing. Most literature on false imprints has focused on their use to avoid censorship or sidestep national laws, for example the numerous books printed in 16th-century London which bore imprints of a variety of continental cities (see e.g.Woodfield's Surreptitious Printing in England). Bibliographers have also noted the use of false imprints to bolster the 'brand' of a book - if books from Germany are known for their quality and craftsmanship then as an English printer why not try to boost sales with a little deception? Recently though I've become curious about the use of false imprints as an indicator of how foreign locales are represented in the cultural imagination of a given place. In looking through bibliographies of books printed in America I noticed quite a few bearing the false imprint of European cities - not a particular surprise - surely a citizen of Philadelphia in the 1760s would recognize and understand the differing importance of a political tract bearing a London imprint versus one from one of the American colonies. The use of false imprints within the British Atlantic world seemed self-evident to me but I wondered about what valence the Americas had in the rest of Europe.

The map above represents more than 150 books published on the continent in French, German, and Italian before 1800 which bear the false imprint of a North American location.

False imprints are notoriously difficult to track down and I can't claim to have done the kind of painstaking material text work required to determine where a book was actually printed. This is especially tough given the fact that there were a number of French and German imprints published in North America, making any simple linguistic sorting useless. Instead, I drew from the main bibliographies on the subject, mainly Emil Weller's magisterial Falschen und Fingierten Druckorte, as well as Marino Parenti's Dizionario dei luoghi di stampa falsi, and the ESTC. There are of course many more false imprints to be discovered and I can't pretend my dataset is anywhere near comprehensive (most glaringly, Iberia and the Netherlands are not represented here).

Though a deep contextual analysis of the meaning of these false imprints will require more time, I wanted to point to a few things that stood out to me. First is the incredibly wide variety of European printing centers which produced books under false American imprints.


Paris is the clear winner on the European side with at more than fifty books printed with a variety of fictitious American place names. The vast majority being Philadelphia. Looking closer at just the French books, it's amazing to see the explosive increase in these false imprints around the American Revolution. In addition, though I found it too late for inclusion in the one of the charts below, I was surprised to find only one French imprint pretending to be from French Canada, a 1765 Paris edition bearing a "Quebec" place of publication.

This boom is closely related to the subject matter of the books. Many of those claiming American origin relate to the radical politics of the revolution, the nature of colonies, and the problems of empire. Adding "Philadelphie" to the title page was likely done not necessarily to fool readers but as part of the overall textual impact of the work. See for example (right) a 1779 tract on the history of the classical world and the problems of colonies.

Though Berlin and Leipzig both feature several of these imprints, there is no clear center like Paris. Likewise, while German language imprints also show a sharp increase with the onset of the Revolution, there is also an earlier trend toward American false imprints.
Ties between the German world and the Americas were of course strong thanks to the migration of German speaking peoples to the British colonies throughout the early eighteenth century. In addition, there was an active German language press in the middle colonies whose publications circulated in Europe, lending more familiarity to places like "Germantown" (under whose name 5 European German books were printed). 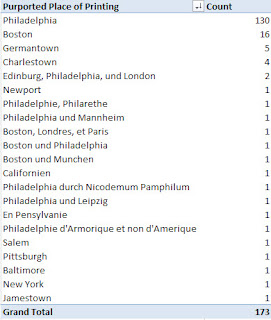 The chart to the left shows the names of the false places of publication in North America. Philadelphia stands out again as the overwhelming leader. This data is however perhaps suspect given the multiple meaning of "Philadelphia." At least in the case of some of the earliest imprints of "Philadelphie" it seems that the an abstract city of brotherly love is intended rather than the nascent town in Pennsylvania. Regardless, the relative importance of Boston and Philadelphia and the relegation of places like New York is an interesting reminder of what was central and what was peripheral in conceptions of British North America.

These purported printing locations provide a different kind of mental geography for how continental printers, publishers, and readers thought about North America. For that reason I found myself fascinated by the variety of, to my mind, obscure, American printing locations. Pittsburgh for example appears as the place of publication - "Pittburgo" - in a 1761-8 group of Italian volumes actually printed in Milan. Newly founded as a settlement and in the news for its role in the Seven Years War, Pittsburgh must have stuck out for the Italian publisher as an exotic foreign locale. Likewise, a 1784 German copy of a Pocahontas play, actually printed in Ansbach features a title page bearing a "Jamestown" imprint: 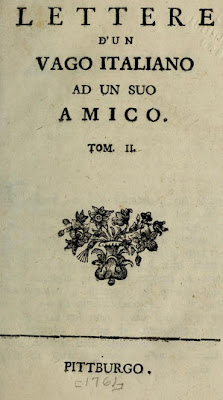 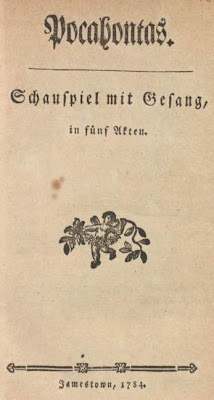 I can only hope that researchers and bibliographers keep finding false imprints and adding to our knowledge of how they functioned in the marketplace of readers and publishers. I'm still at a loss to explain just what all those Philadelphia imprints, actually printed across the German states, would have meant to their readers and think there's the potential for some really insightful readings of this kind of paratext in the future!

*****
Below I've included a less aesthetically pleasing version of the complete map but with a basemap layer and some interactivity: